Often associated with dangers of the night, bats are nocturnal mammals with a generally bad reputation. Across cultures there are many fables surrounding the mysterious motives of bats. To say a bat has a motive may be a bit extreme but, don’t underestimate the hidden dangers. Forget the folklore and legends surrounding bats; there are true hazards that come from contact with bats. 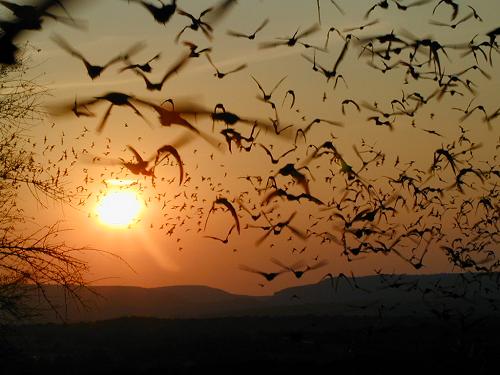 The Problem with Bats

The ability of flight has provided bats to opportunity to be one of the most widely distributed type of mammal. Found in almost every habitat available, there are 1,240 known species worldwide. In the United States, there is an estimated 45 to 48 different species of bats.  The most common are the Little Brown bat (Myotis lucifugus) Big Brown bat (Eptesicus fuscus) and the Mexican free-tailed bat (Tadarida brasiliensis).  All those bats need a place to rest their bones and if you live near a large colony, there is a good chance that you will be roomies with one from time to time.

There are many reason why having a bat move into your home would be a bit of a nuisance.  Bats are often the hosts for a variety of diseases due to their mobility and social behavior. The most common and perhaps the most dangerous, is Rabies. Rabies is a viral disease, which causes inflammation of the brain in humans and warm-blooded animals. Bats are just one of the many animal carriers that humans are exposed to long enough to have rabies transmitted, typically via bites or scratches. A lesser-known danger of having a bat infestation is Histoplasmosis, which is an infectious disease spread by inhaling spores of the Histoplasmosis fungus found in the guano of birds and bats. If not diagnosed soon after it has been contracted and it spreads past the lungs, then it could become fatal.  Simply put, if there is a bat in the house, it would be in your best interest to get it out.

Being that bats are nocturnal, they prefer spaces that are tight and dark, such as your attic, chimney or in your walls.  If there are bats, it is possible to hear scratching or squeaking noises. Other signs include unexplained stains on the walls or ceilings, which could be caused by an accumulation of bat urine or guano.  Be sure to check for possible point of entry on the exterior of the house. If there are noticeable rub marks near holes and crack, then it could be a sign of repeated entry. Precautionary measures should be taken to ensure the safety of your home. Examine your home. If you see any cracks or holes that are larger than a half-inch, be sure to seal them. Basically, cover any openings to your home, including windows, chimneys and plumbing holes. Winter and fall months are the best to “bat proof” your home, they are typically on vacation.

So, you have all your proof, there is a bat in the house. What to do now? If you attempt to remove the bat yourself, the best approach is the one that does not get you bitten.  Confine the bat in one location by limiting all of its exits, except for one. If this approach does not work, the best way to handle the removal would be consulting an expert.