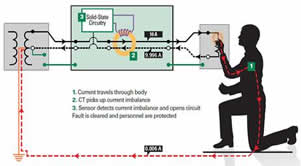 A Ground-fault Circuit Interrupter (GFCI) is a device used to turn off an electrical power circuit when it detects an unbalanced current flow. These unbalanced current flows are also known as a short circuit or nuisance tripping and are caused when live wires touch metal conduits.  The GFCI’s main objective is to reduce the risk of electric shock and it does so by monitoring the slots of an outlet. Not to be confused with AFCI’s, Arc-fault circuit interrupters. While AFCI’s are also home safety devices, they are used to provide protection from fire hazards, not shock hazards. On an outlet, the left slot of an outlet is called the “neutral,” the slot on the right is called “hot” and the hole at the bottom is called “ground.”

The GFCI tracks the amount of current flowing through the “hot” to the “neutral.” If there is any discrepancy then the GFCI will trip the circuit before electrocution occurs. It only takes about 4-5 milliamps to cause the GFCI to trip, usually within one-thirtieth of a second. In 1955, during the developmental stages of what would be the modern-day GFCI, the cold-cathode system caught discrepancies at 250 milliamps. With each advance in technology, GFCI’s were able to respond quicker and with more accuracy.
Modern technology, for the win!

Typically, GFCI’s are installed in locations such as a kitchen, bathroom, laundry room or anywhere an electrical circuit could accidently come into contact with water.  Unfortunately, these are the locations most likely to cause nuisance tripping due to the leakage caused by stationary motors found in bathroom vents or fluorescent light fixtures, for example.
There are three different types of GFCI’s. The most common type is called a “receptacle-type” and resembles a common wall outlet.

Another type is a circuit breaker GCFI, which can be used to provide protection to all receptacles on that circuit. During the earlier stages of development, most GFCI’s were the circuit-breaker type. However, due to insufficient technology, they were prone to constant false trips called “nuisance trips”. It wasn’t until the 1980’s that GFCI’s were built into outlet receptacles and eventually GFCI’s were attached directly to power cords, extension cords or the appliance themselves, such as hair dryers.
Temporary or portable GFCIs are available but should typically only be used during construction or for outdoor uses. Since they are not built for permanent use, temporary GFCI’s should be tested before each use. 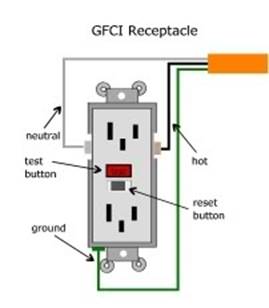 Truthfully, you should check all of your GFCIs with regularity. Most home inspection professionals recommend that you test them monthly. When testing the receptacle-type GFCI, pushing the TEST button should cause the RESET button to pop out. Push the RESET button to re-establish power and it’s that simple!

Take notice of how frequently you have to handle a nuisance trip. If it is happening often then there are steps you can take. Be sure that circuits are less than 100 feet.  Try to avoid using GFCI’s for fluorescent or other types of electric-discharge lighting fixtures and permanently installed electric motors. If the problem persists, schedule an inspection by a professional!