The Trouble with Nitrogen Dioxide

First and foremost, Nitrogen Dioxide (NO2) is a prominent component of air pollution. That’s right, the very same pollution we have come to know and love around the globe. It is an unfortunate result of the combustion processes of fossil fuels. As a gas it is reddish brown, the same alluring color as the brilliant sunsets Earth is known to have. That comes from excessive amounts of Nitrogen in the ozone. Despite it’s artistic abilities, Nitrogen Dioxide is not only toxic, it is deceitful. Inhaling low concentrations of it can anesthetize your nose, allowing for possible over exposure. Which could be problematic. 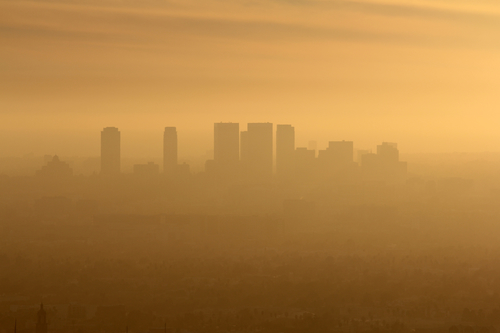 No, I’m not exaggerating when I say that it is everywhere. According to Green Facts, in most Urban environments the principle source of Nitrogen Dioxide is emissions from motor vehicles. Other outdoor sources such as Power plants, domestic heating, etc. leave their mark as well. In addition, exposure to Nitrogen Dioxide can happen indoors, specifically from un-vented cooking or heating appliances that use gas, and tobacco smoke (as if you needed another reason to quit).

Depending on the length of exposure, Nitrogen Dioxide can have acute to severe effects on your health. Noticeable changes in an individuals reaction to allergens, is typically the first indication of exposure to NO2. According to to the Environmental Protection Agency, an inflammation of an airway may lead to increased respiratory symptoms in individuals previously diagnosed with Asthma. Other studies show a correlation between individuals living in urban areas near busy roadways and an increase in both short and long term side effects of exposure. Raising concerns of unequal distribution of health risks within a given population, often those who are underprivileged.

As per usual, diligent and proactive care is your best defense.

If you have gas appliances, make sure you have them professionally inspected each year. (That’s where we come in!)
In addition to annual checks, be sure that all gas appliances are properly vented to the outdoors.
Keep fireplace flues fully open and clear of obstructions when in use.
Never idle a car inside a garage or car port, concentrated levels will amount to more than just Asthma.
Make sure that wood stoves are correctly installed and vented, the smoke needs an escape route.
Have your home heating system and chimney professionally inspected each year.

What should I do if I suspect a problem?

If you suspect exposure to Nitrogen Dioxide is occurring and you can locate the source (e.g. a gas stove), turn off the source and get fresh air into the area. Open windows and doors, use a fan if necessary, anything to increase air circulation. Especially, if you experience unexplained symptoms such as cough, fatigue, eye and nose irritation that go away when you leave home, NO2 poisoning may be occurring in your home.

Elderly people, young children, and people with chronic respiratory diseases, such as asthma and emphysema, may be very sensitive to NO2; they should be evacuated. If the symptoms are causing discomfort or if they are persistent, consult your doctor.

If you suspect you have a leak or high rates of exposure, contact a professional for more information.