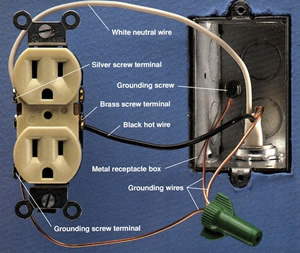 The appliance you plug into an outlet completes the circuit from the hot slot to the neutral slot, and electricity flows through the appliance to make them operate or to heat the coils. Let’s say you plug a light bulb into the outlet. The power will flow from the hot prong, through the filament and back to the neutral prong, creating light in the process.
What if you were to plug a thick strand of wire straight from the hot slot to the neutral slot of an outlet? Unlike an appliance, which limits the amount of electricity that can flow for example a 100 watts (for a light bulb) or even 500 watts (for a toaster), the wire would let an incredible amount of electricity flow through it. Back in the breaker panel, the circuit breaker for the outlet would detect this huge surge and it would cut off the flow of electricity (trip the circuit breaker). The circuit breaker prevents the wires in the wall or the outlet itself from overheating and starting a fire.

Well, if you look around your house, what you will find is that just about every appliance with a metal case has a three-prong outlet. This includes some things, like your computer, that have a metal-encased power supply inside even if the device itself comes in a plastic case. The idea behind grounding is to protect the people who use metal-encased appliances from electric shock. The casing is connected directly to the ground prong. 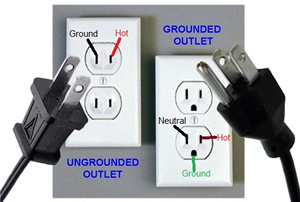 One example of how this can protect you is, if a hot wire comes loose inside an ungrounded metal case, and the loose wire touches the metal case, the metal case is now hot, and anyone who touches it could potentially get a fatal shock. If the case is grounded, the electricity from the hot wire would flow directly to ground, and create a surge that would trip the breaker in the breaker panel. This will prevent the appliance from working, but it will save you from electric shock.

Here’s something we have all seen, and maybe done. If you remove the ground prong or use a cheater plug so you can plug a three-prong appliance into a two-prong outlet. You notice that the appliance will work. Yes, it works, but you have now removed you safety and expose yourself to electric shock if a hot wire were to come loose and contact the ungrounded case.